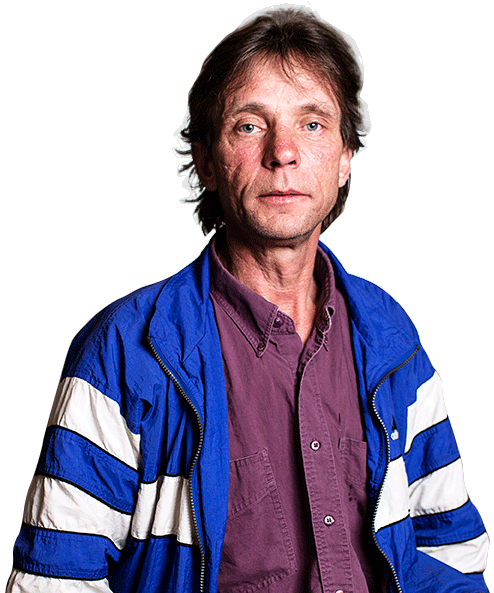 When you first meet Al, you are taken in by his eyes: clear, strong and focused. But those eyes also contain a vulnerability that tells you he is someone who has lived rough, faced difficult decisions, and known pain.

Born and raised in Victoria, Al’s life was turned upside down 11 years ago when he lost his job as a security guard. He admits that he shares responsibility for the loss as, “I was stubborn. They wanted rid of me and I gave them the excuse.”

Unable to find a new job, combined with personal troubles at home, Al ended up on the street. A short time later, his brother, Tom, lost both his job and the place where he was living, and joined Al in the vacant doorways of downtown Victoria.

“I couldn’t stay in the shelters,” says Al. “The snoring and stench of feet was too much. I’d rather sleep on the street.”

Al and his brother staked a nightly claim in a spot with an overhanging roof that helped shield them from the snow and rain.

“It has its ups and downs,” says Al. “Eighty to ninety percent of the people you meet are good, but every day has its challenges.”

One of those challenges was finding a safe place to stash his sleeping bag and extra clothes. “No matter how well you hid it, someone always sniffed it out and stole it,” he says.

The one bright spot in Al’s day was Our Place. “I’d show up every morning for breakfast,” he says. “It was the first place I turned to when I had nowhere else to go.”

The one thing that Al always had going for him was his work ethic. “I don’t ask anyone for anything,” says Al. “I would get up at six in the morning to go bottling, and was usually on my bike until ten at night. Living on the street is boring. You have to keep busy.”

Collecting bottles around Victoria also gave Al a sense of purpose as neighbourhood residents came to know his schedule, and would look out for him hauling bottles and cans on his bicycle.

“Sometimes I would be so loaded down with bottles that people would stop to take my picture,” Al says with a minimal grin. “I even got a police escort to the bottle depot once after a cop saw me piled high with 780 bottles. It was just two blocks, but I’ll always remember that.”

Another memory he’ll cherish is the generosity of some of the friends he made on the route.

“One family gave me a new sleeping bag when they heard mine got stolen,” he says. “Another stuck an envelope with forty-five bucks inside into their recycling bin at Christmas. I tried to return it, but they insisted I keep it.”

Al enjoyed bottling because it allowed him to be his own boss, which was a better fit for his personality. But Al also knew he needed to get his life back on track.

A father of two, who lost his own father at 14, Al wanted a more stable life. That goal became even more important when he took on responsibility for his two young grandchildren.

Always keeping busy, Al was spending more time at Our Place by volunteering in the hygiene area and cleaning up the courtyard. So when the Manager of Housing, John Sherratt, heard Al was ready to make a change, he suggested Al apply through the Coordinated Access to Supportive Housing (CASH) program for supportive housing.

Shortly after moving into one of our 45 transitional units, Al applied and was hired for a custodial position at Our Place, where he has been working part-time for the last four months.

“It’s really helped my self-esteem,” says Al. “And got my morals back on track.”

Having lived on the street for over a decade, Al knows he still has a way to go before he can return to sustainable, independent living. But the staff at Our Place is there to help him succeed by providing more employment skills and planning his progress to less-supported housing.

And as one look in Al’s eyes will tell you, he’s too strong to fail.