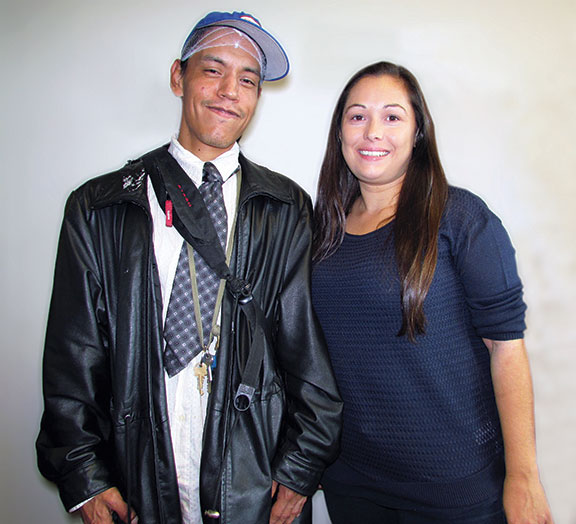 At the end of a hard shift, most of us look forward to heading home, getting into something cozy, and relaxing. For Clifford, however, his bed was a dumpster behind the restaurant where he worked.

For the last four years, Clifford, 34, has worked the evening shift at a local restaurant, cooking up chicken and earning the respect of his employer.

When you meet this young man, it’s easy to tell that he takes great pride in being a hard worker and an employee that his boss can count on. So why, one may ask, was he spending his nights curled up behind a dumpster?

The short answer is that Clifford has never been great with money. The moment he gets paid, the cash disappears. But the true answer can only be found by looking deeper into his past.

The ominous shadow of the residential school system that had scooped up his parents and grandparents lay waste to his childhood, sinking its claws into his own feelings of self-worth.

Abandoned by his birth parents, Clifford was raised by “Aunties and Grandmothers.” Short in stature, he found school difficult as other students kept picking on “the smallest guy in class.”

He made it to Grade 12, but preferred working over school, and finally stopped going altogether.

Moving from job to job, Clifford got involved in two serious relationships, finding stability for a time before the marriages broke apart.

“I was working a lot,” he says in reference to his second partner, “and not giving her what she needed.”

After his last break-up, Clifford became more lost than before. He was now the father of seven children with two ex-partners, and work became his only refuge.

With a creative mind, Clifford spent his down time building shelters in the woods “until the police showed up and made me tear them down.”

He enjoyed the process, however, and would build shelters for other people who were homeless. After getting tired of being roused by the police, he found a sanctuary behind the restaurant’s dumpster. With the blessing of the owners, he built a small shelter and called it home.

But soon that began to take its toll.

“I got tired of being outside,” he says with a look that comes across as an apology, as though asking for a warm place to sleep is a sign of weakness.

That’s when one of Clifford’s aunties introduced him to Kim, an Aboriginal Housing Support Worker at Our Place.

Kim’s first piece of advice was to take half of every paycheque that Clifford earned, and put it in a savings account in order to save up first month’s rent and damage deposit for an apartment.

With Kim’s help, Clifford was soon moving into his own place. The transition, however, isn’t as easy as one might imagine.

“I miss outside,” says Clifford with a shy grin. “I was out there so, so long.”

When asked what he likes best about being inside, he answers, “Not being worried about some drug addict coming up to me and asking ‘Hey, you got this or you got that? You got two?’”

“Which is why you never had any money,” Kim interjects.

Clifford shrugs. “When you get indoors, you’re so happy, you want to give all your stuff away.”

With his focus less on day-to-day survival now, Clifford has other demons to face on his road to feeling a sense of hope and belonging. He wants to provide for his children and find a way to give them a home that he never had.

His gaze drops as he confesses, “I’m amazed I’m still here actually. I think about killing myself every day.”

It’s a tough admission from a sensitive man who feels lost from his culture, and disconnected from family. It’s as if the concept of ‘home’ is something forever just out of reach.

“The loneliness is still there,” he says, “It always will be there. But I’m still here, and I’m doing some good.”

Being housed, however, is the first step to healing. And with Our Place’s help, Clifford is making plans to begin counselling — something that was far too daunting while living behind a dumpster.