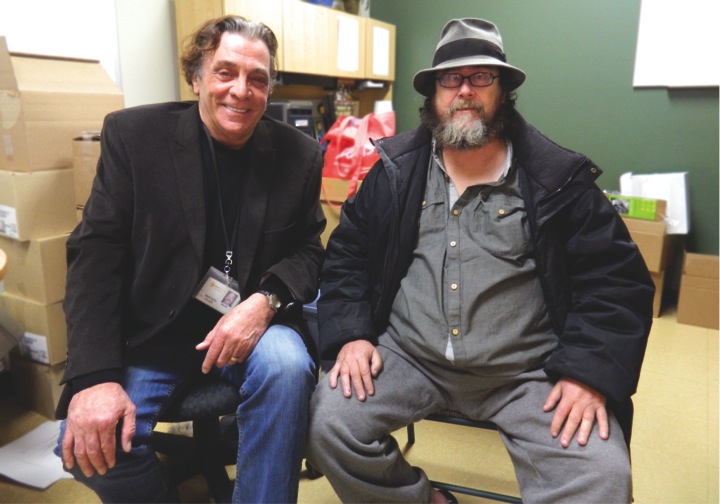 “What I’m scared of, terrified of, is that I’m going to go back to it. But I don’t want to go back,” says family member Gordie about his 30-year addiction to drugs.

What’s remarkable about Gordie’s statement is the strength he shows every day to stay sober after battling his addiction for three decades.

“I had a rough life,” he says in a soft voice, and the pain glistening in his eyes speaks volumes.

He left Montreal as a young man and moved west, working the same janitorial job in a hospital for 30 years, while trying to keep his addiction a secret.

But the secret, as most addicts will attest, became a nightmare of destructive thoughts that left Gordie wishing, “I wasn’t around anymore because then the pain will stop.”

Eventually, Gordie reached a point when he wanted to change.

“I still crave it,” he admits, but thanks to the support he’s found at Our Place — especially from David, his Resident Support Worker — he’s been clean now for five months.

“It’s remarkable,” says David. “Gordie is learning the life skills he needs to be a vibrant member of his community again.”

“Last time I did drugs,” says Gordie, who has been with Our Place since it opened its doors, “I knew I needed help, and I turned to David.”

“Those are the magic words,” says David. “You can’t do it by yourself. Somebody else has to be the quarterback and that’s what the team at Our Place does.”

With the support of Our Place, Gordie has made some remarkable strides. He’s learning how to budget, returned to school, paid his own way through a detox and stabilization program, purchased new glasses and had dental problems fixed.

“We don’t get a lot of people who pay their own way,” says David proudly.

The bond between these two men is palpable as they both know what it’s like to be living on the street. With his bright smile and confident air, it’s hard to imagine that David once walked the same painful path as Gordie.

But it’s that street knowledge that makes David so easy to talk to. He doesn’t judge anyone because he’s been there and he understands how each day of sobriety is something to celebrate.

“Without David’s support, I wouldn’t be here,” admits Gordie, who still suffers from debilitating nightmares and social anxiety. “I nearly died five times from drug overdoses.”

“Our Place gives people a place to step back from the storm,” says David. “And our job is to make it a safe environment, free from drugs, so that people can get help and learn the tools they need to succeed.”

Asking for help is just the first step in a long recovery process. Before entering detox, for example, Gordie went through a six-month series of weekly medical treatments. The grueling procedure is similar to chemotherapy for cancer, but David was with him every step of the way.

Along with money management, group and individual therapy, Gordie is also learning about healthy eating and diet, a skill that is easy to overlook, but is essential for staying healthy.

“He wants to eat well,” says David with his trademark smile, “we’re simply showing him how it’s done.”

As Gordie continues to improve day-by-day, he can, for the first time, begin to look ahead to the next step of graduating from the transitional housing program and finding a place of his own.

Before that, however, he wants to finish school and do some volunteering at Our Place to help others who face the same difficulties.

“Gordie did all this work,” says David. “And there are many more just like him who need our help, too. We just need to find a way to reach them.”

The 45 adult residents living in transitional housing at Our Place have access to so much more than shelter.

With the guidance and support of the residential support workers and the mental health and addiction clinician, residents develop life skills and reach healthy goals that enable them to live rich, full and independent lives.

During this past fiscal year, over 20 people, ranging in age from 19 to 74, bid farewell to Our Place upon successfully transitioning to homes elsewhere in the Greater Victoria area.