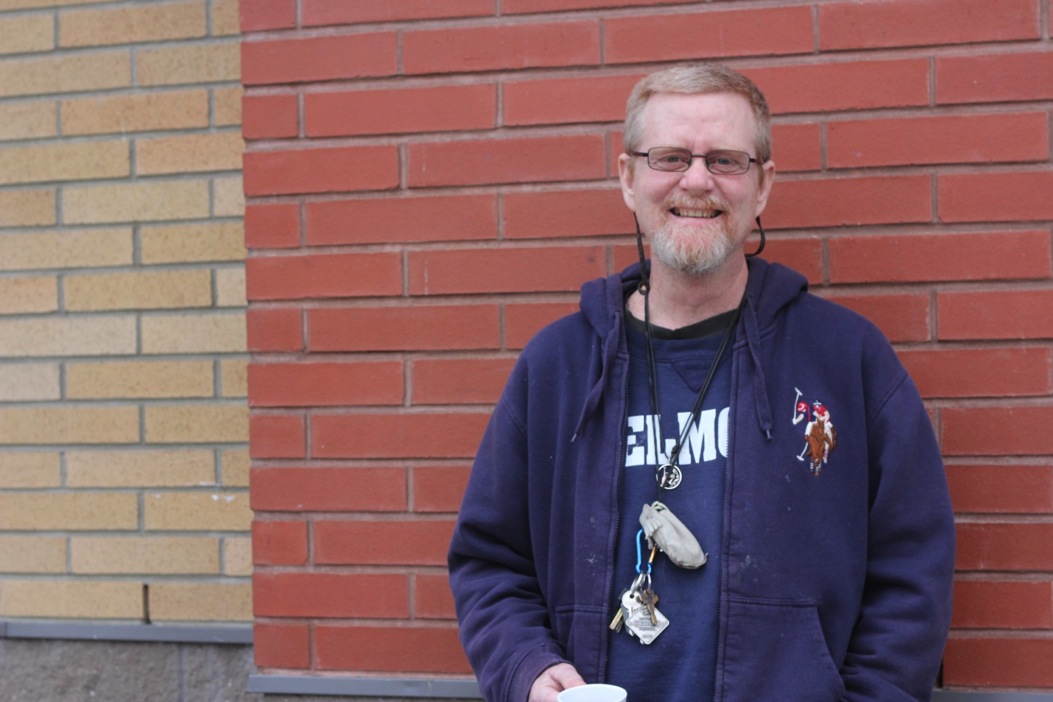 If you walk into Our Place on a Wednesday afternoon, you’ll find a line of people waiting for Gordon.

Every week this gentle man extends care and compassion to a host of people who sleep outside or on hard mats – people whose shoulders ache, whose spines are stiff, and whose backs are in dire need of some acupressure. Having just graduated, he is now licensed to practice acupressure on a regular basis. Gordon is soft-spoken, thoughtful, and articulate. Though an integral part of Our Place’s extensive volunteer team, Gordon’s life wasn’t always so gratifying.

“I spent about a year and a half sleeping outside,” he says. “I was between Vancouver and Victoria when I started gravitating towards the street.”

Gordon grew up in a family of nine in Calgary, but had roots on Saltspring Island, where his grandparents lived. He held various jobs: he worked up North, he ran his own business, he apprenticed as a jeweler, among other things.

“I go home for Christmas every year now,” he says.

“My dad died when I was 21,” he says. He was only 56 and Gordon’s youngest sibling was 16 at the time. Remembering his west-coast roots, Gordon eventually migrated west.

“My brother was living here, and my grandmother, too,” he says. “My brother and I lived on a boat for a couple years together.”

“Shortly after that is when I sort of lost it,” he shares. “I didn’t see a decline in my mental health, but things were certainly getting weird.” Gordon was living on the street in Vancouver when one day, some people walking by found him passed out in a park.

“I came to and they had phoned the ambulance,” he recalls. This happened two more times before everyone started getting suspicious that something more complicated was playing out. “The third time they found me, they committed me to St John’s hospital,” he recalls. “I later learnt that all this was happening because of my schizophrenia. It was just in overload.”

Though he spent 6 weeks in hospital, it wasn’t until Gordon moved to Victoria in the early 90s that he was officially diagnosed with schizophrenia.

“Some people get freaked out when they get diagnosed,” he explains. “But for me, it was just like a light came on. The doctor explained that they never know how people will react to a medication, so we just tried and tried until one worked.”

Gordon thoughtfully shares his knowledge, explaining that about one third of people with schizophrenia make a full recovery, one third learn to cope, and one third never get past the psychosis. He recalls how his own doctor explained this very thing to him, providing Gordon with clarity and hope.

“At the time, I couldn’t even really boil water,” he remembers. Shortly after getting diagnosed, Gordon started coming to Our Place for meals.

“I started coming here for dinner, because the biggest task I could focus on for the week was something as simple as having a bath.” Our Place became somewhere to drink coffee, somewhere to hang out and smoke: a place to think. “This was a place that I could drift if I needed to drift,” he says.

Gordon had his second major episode about ten years after coming to Victoria.  He was housed, had a steady job, and didn`t need to come to Our Place for meals. Life was stable. But when the episode hit, that quickly changed.

“I spent about 5 months in the hospital,” he recalls. The doctors worked further with his medication until Gordon left the hospital feeling like he was on solid ground.

Gordon credits his doctors and family support as the two main things that helped him recover. “My family did their best to find what this illness is about,” he says. “I really don’t think of the illness anymore – it is such a small part of my life now.”

Gordon links his family’s love and support – an integral key to success that many of our family members don’t have – to never losing hope and confidence in himself.

“I know I won’t ever have to sleep outside again,” he says. “Because I know where the supports are now and I would recognize my psychosis coming on, I think.”

Every week, Gordon offers compassion and practical care to a variety of people – many of whom are in similar places to where he once was

“I suppose what I’m trying to do is formalize the kind of help I’ve had from others along the way,” he says thoughtfully. “It’s a way to engage. And I do enjoy the response that my acupressure gets.” He smiles with the confidence of someone who knows he’s making a real difference.