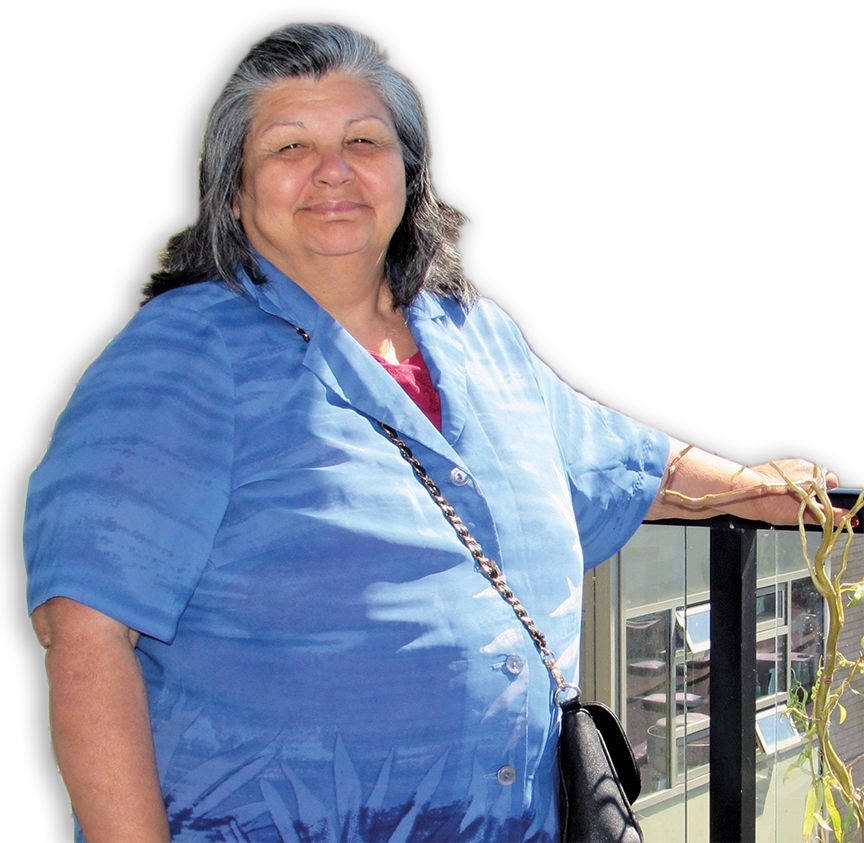 At the age of 60, Mabel accomplished one of her lifelong goals.

“I didn’t really do great in school when I was young,” she says. “It was always a struggle, and I never really understood why until later in life when my learning disability was diagnosed.”

But despite that obstacle, Mable never gave up on her dream. Math was her biggest challenge, but every time she failed the final exam, she would brush herself off and try again.

“I never gave up,” she says. “And when the school asked me to talk to the younger students, I encouraged them to never give up either.”

That strength of tenacity has served Mable well as she works hard every day to remain positive and make her dreams come true.

Born in Manning, Alberta, Mabel’s family moved to Vancouver Island at a young age upon a doctor’s recommendation that it would help with her childhood asthma.

But while the asthma disappeared, Mabel endured two sexual assaults — one when she was 8, the other at 13 — that sent her life on a spiral into addiction.

That addiction included alcohol, drugs, sex and gambling, the weight of which led her into unhealthy relationships and moments of utter despair.

“I remember sleeping in a car in -40°C weather covered in old clothes for warmth. I would sneak into a motel to get a shower and scrounge for leftover crackers.”

Like most women who find themselves alone and vulnerable on the street, Mabel attached herself to the wrong men.

“When I left the last one,” she says about Husband No. 3. “I knew something inside me had to change, something big.”

As Mabel talks about her past, her soulful eyes reflect the fortitude she needed to survive.

“It took a long time to get over that emotional damage,” she says. “But I heard the word of God telling me ‘You never have to do that again’.”

A small smile breaks across her lips as she shares that she has now been clean and sober for 24 years.

Mabel arrived at Our Place at the end of January. She was homeless and needed someplace to catch her breath and get back on her feet.

Here, she found the housing support workers to be friendly and helpful, “but what I really like is if they don’t have the answer, they’ll find it. They realize that we all need help at some point in our lives, regardless of our situation.”

Living on the Recovery Floor, Mabel has become a mentor and role model for those women who are still struggling day to day. She sees her role today as one of support and guidance, to let other women know how they can walk out of an abusive relationship and find the help they need.

“I try to give people hope,” she says. “I didn’t have one week of sobriety without hope.”

“Right from the get-go, Mabel was ready and eager to put in the work,” he says. “She doesn’t let roadblocks stymie her efforts or get her down.”

“She’s also a really good influence on the floor,” he adds. “Really focused and motivated.”

The Recovery Floor is a fairly new initiative by Our Place that affords its residents who are active in their recovery the opportunity to support each other in their sobriety. Regular meetings and ongoing counselling give the residents a positive path to follow as they make plans for their future.

“One day I see myself running a Bed and Breakfast and travelling the world to spread the word of God and tell my story,” says Mabel.

In the meantime, Mabel’s next step is to move into less supported housing where she’s excited about the possibility of a kitchenette and, her eyes light up with glee as she gushes, “a bathtub.”

And, despite her past trouble with men, Mabel is looking forward to meeting Husband No. 4.

“But this time,” she says, “it will be different. I have grown as a person, and I have knowledge between my ears. I’m not struggling anymore. I’m thriving.”