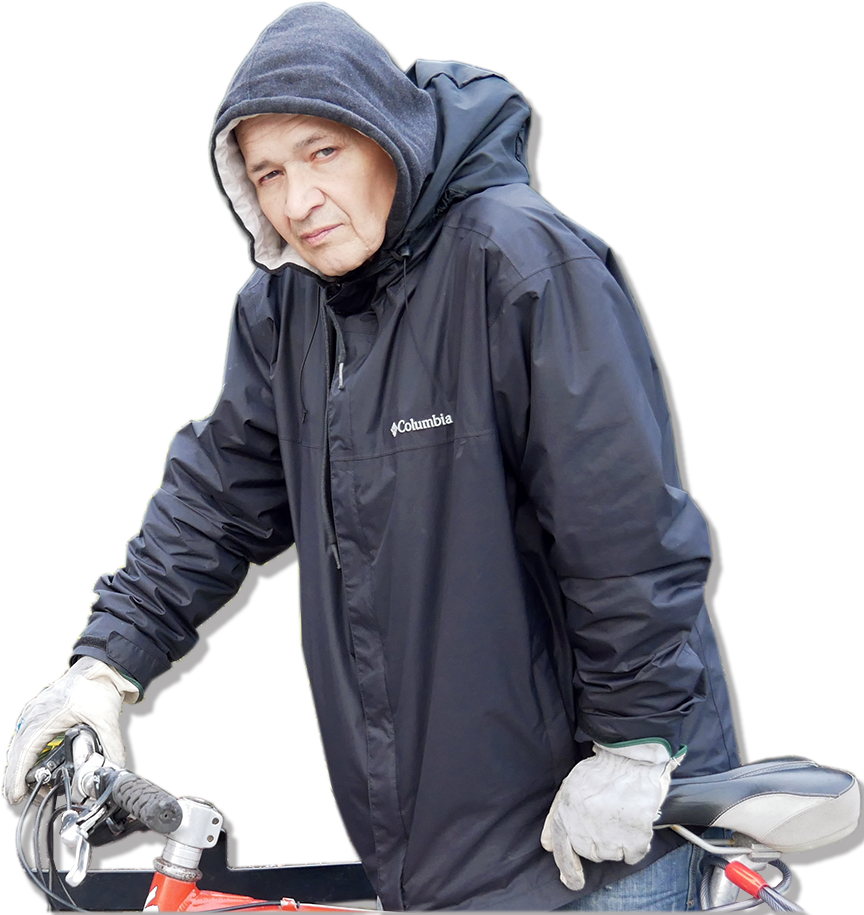 For most of his 57 years, Marlon Bowe’s life was defined by a cycle of addiction, poverty, violence and prison sentences. He’s cheated death more than once and has the scars to prove it.

“I’ve been stabbed about seven times and shot twice,” he says. “I shouldn’t even be alive but here I am, still hanging in there.”

Born on the Alkali Lake Indian Reserve, Marlon and his 11 brothers and sisters were raised mostly by their mother. His father, a hard-drinking pro rodeo rider, spent most of his time on the road. When he did come home, the alcohol and violence that came with him made life miserable.

“He’d beat up my mom. Sometimes I tried to stand in the way and I got beat up too,” he recalls. “He’d bring his friends home to party and they abused some of my brothers and sisters. We told him but he didn’t believe it.

When he was just seven years old, Marlon and a 14-year-old friend from the reserve ran away to Edmonton, where he lived for two years, stealing watches and wallets to survive and sleeping in churches and laundromats.

“I’d sleep behind the dryers because it was always warm there. In the morning I’d sneak into where the vending machines were and steal a pop and some chocolate bars and that’s how my day would begin,” he says. “I got caught a few times. They’d put me on a bus but I’d just jump off at the next stop and go back to Edmonton.”

Ever since then, he’s lived the life of a transient, stopping at home once in a while and staying with either his mother or his grandmother before hitting the road again. He’s lived in, and been arrested in, towns all across Canada.

“I was always going away because it was the only way I felt free,” he says.

Marlon was just eight years old the first time he tried heroin, which was given to him by a cousin who was addicted to drugs.

“I didn’t fix (the heroin), but I ate some and I remember laying there looking up at the sky feeling like everything was all right,” he says.

During his teenage years, Marlon started injecting heroin, kick-starting a chronic addiction that has had a hold on him ever since.

Four decades later, with the help of family and staff at Our Place, Marlon is working hard to turn his life around. He’s stopped using heroin, managed to secure temporary housing and works part time power-washing the sidewalks outside Our Place at 919 Pandora.

On the left side of his torso, the scar from a bullet wound serves as a constant reminder of his closest brush with death.

About 20 years ago when he was living in Vancouver, Marlon heard that his aunt had been beaten up and robbed in her home by a guy named Jimmy and his brothers, who were well-known criminals in the community

Marlon and a friend drove back to Williams Lake to confront the culprits and were met at the door by Jimmy, brandishing a fully-loaded .308 rifle. Jimmy shot Marlon’s friend in the leg and as the two tried to flee, Marlon took a bullet just below his rib-cage.

When he got out of hospital a couple of months later, Marlon went back to the only life he’d known – stealing and dealing drugs to support his habit.

Over the years he’s worked as rodeo rider, a musician, pipe-fitter, mill worker, carpenter and miner. He never spent much time in school, but worked on his reading and writing skills whenever he went to jail, which was often.

“In a weird way jail was good for me. Whenever they offered me courses I’d take them,” he says. “Every opportunity to learn I’ve taken it.”

He’s had two serious relationships in his life – the first with the mother of his four children (three boys and a girl) and the second with his current partner.

Five years ago, Marlon’s ability to survive suffered a serious blow when he had a stroke that left him barely able to speak, walk or play guitar, a hobby he remains passionate about.

It took him two years to regain his speech and although he has a noticeable limp, he can walk and ride a bicycle again.

But the stroke severely limited his ability to work and, three years ago, he ended up living on the streets of Victoria. Over time, he became a regular visitor to Our Place, where the support of friends, staff and family eventually led him to sobriety.

“I still need the methadone to keep me from doing heroin, but at least this way I don’t have to be drug sick in jail or do crimes to support my habit,” he says.

After starting out as volunteer with the Our Place facilities department,  Marlon moved on to the Hand Up program, which offers 12 hours a week of paid work but also requires commitment to change and increased responsibility.

His consistent efforts earned him a small suite at Our Place and he no longer has to worry about having a place to sleep.

Now that he’s reached a place that offers continued hope and growth, Marlon has become a role model to other people that Our Place serves and plans to participate in more employment programs to further enhance his work skills.

“It’s kind of cool working at Our Place because I’m around all the people I know.”