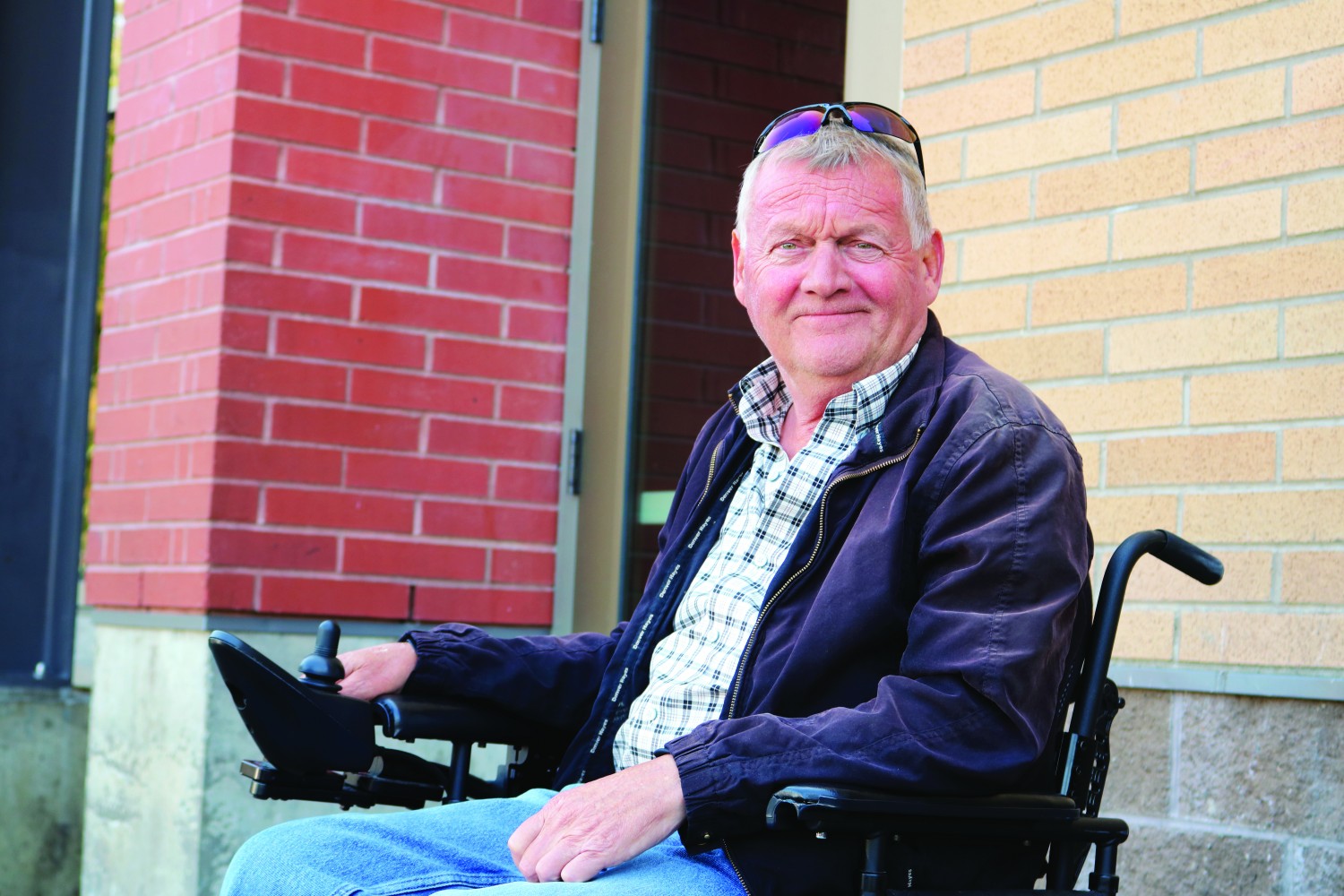 Robert is no stranger to diversity. Life has placed many obstacles in his path, and yet he battles them all with a joke on his lips, and a smile on his face.

Sitting in his wheelchair in the Our Place dining room, enjoying that day’s lunch, Robert is quick with a quip:

“There were times my pants were so thin I could sit on a dime and tell if it was heads or tails.”

Born in Victoria, Robert had to “grow up fast” when his father was diagnosed with a brain tumour, and died within two years. Robert was only 16 at the time. He left high school to take over his father’s job in maintainance and custodial.

Two years later, however, he went back to school and began searching for a career that spoke to him. He earned both his private and commercial pilot’s license, but found the money wasn’t great.

He then earned his welder’s ticket and worked for several years welding trucks . . . until the contract ended.

Frustrated, he got his Class 2 driver’s license and went to work as a bus driver with Greyhound with routes all over Vancouver Island.

That job lasted for 16 years and allowed him the opportunity to build up a repertoire of groan-inducing jokes that he could share with the passengers.

“I have enough money to last me the rest of my life . . . unless I buy something.”

When the bus industry began to shrink, Robert found he had to reinvent himself once again. He worked in Victoria Hospice as a cleaner, and a two-year stint with Empress Taxi that he helped rebrand as Yellow Cabs.

But then, at the age of 54, Robert suffered a stroke in the same area of the brain where his father’s tumour had been located.

The stroke paralyzed his entire left side and put him in a wheelchair.

“What do you say to a camouflaged person in a wheelchair? You can hide, but you can’t run!”

Determined not to let this next obstacle keep him down, Robert polished up his joke book and started physical therapy.

Every day for the last six years, Robert has been working hard to recover, and now his left side is working again.

He still needs the wheelchair, but “I can walk about twelve feet before I fall down. If they named a race after me, at least it would be over quick.”
Unable to work, Robert ended up on disability and living in subsidized housing.

“I have a good view of the Save-On-Foods Memorial Centre,” he quips. “I watched Elton John’s limo drive inside the arena . . . he didn’t wave back.”

Robert never married and has no children “that I know of.”

His disability payments get him through the month, but only with a little help.

“That’s why I come to Our Place,” he says. “I like the lunches. I make my own breakfast and supper, but Our Place’s lunch helps stretch my disability cheque through the week.

But it’s not just the meals that brings Robert down to 919 Pandora. It’s also the social aspect.

“I get to crack a few jokes with people and that makes the day go a little easier. It’s a social outing. I eat my lunch and then do my chores for the day.”

“My career isn’t over yet,” he says, “but dance instructor might not be in the cards.”