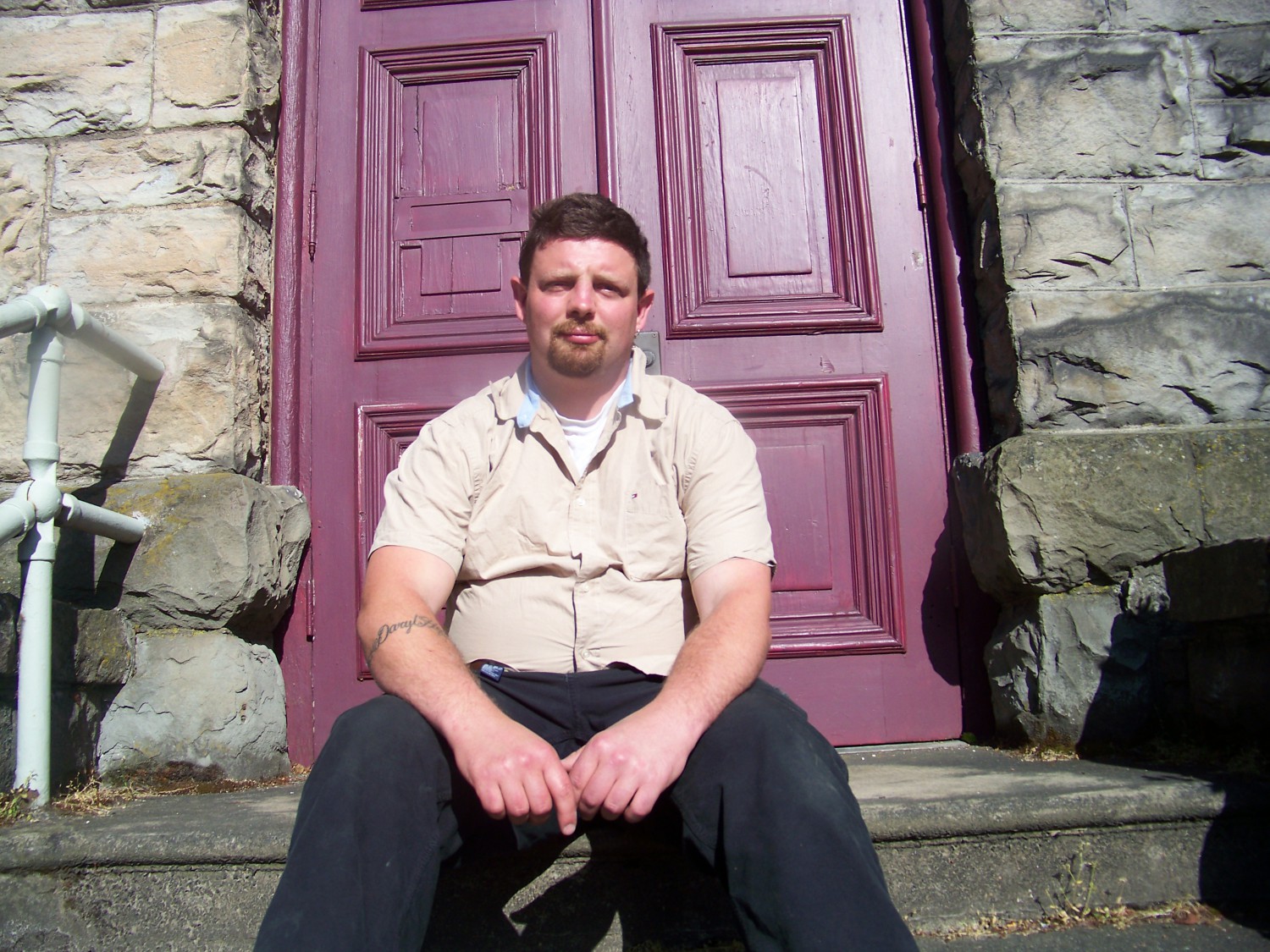 “My dad was a long-standing member of the Victoria street community,” says Shawn, 29, as he sips a coffee at the end of his work day. “Yeah, he died on the stairs there behind the Empress. He had a heart attack and an alcoholic seizure.”

Even though the paramedics successfully resuscitated Shawn’s father, Daryl died three days later in hospital. He was 47 years old.

Shawn looks down at the tattoo on his right arm. There, his father’s name and the year of his death are written in an elegant script of black ink: Daryl 2009.

“I made a promise to him years before that when he was gone, I would quit.” Finally confronted by his father’s death, Shawn had a tough time honouring his promise.

His father grew up in a world of extreme addiction and mental illness. He worked occasionally but relied on his wife to be the family provider. “He drank everything. He drank rubbing alcohol. It’s super cheap, eh, and it has a high alcohol content.”

Plus his dad was a violent man, especially when he was intoxicated. “I was used to it,” says Shawn. “If I was hanging with Dad, then I was drinking and fighting, too.” Shawn recalls the abuse he withstood from when he was a kid. “I remember getting punched from when I was about four years old.”

Even so, Shawn came to understand his father’s drunken rages, a despair stemming from a life without a father of his own and a drug-addicted mother with psychological problems who simply was not there to raise her two boys and two girls. “Often it was my dad who held the family together. He was the eldest” But his father and his siblings were eventually placed into a boarding school where he was subsequently sexually abused.

Shawn grew up with a life of drugs and alcohol and violence. And, like his father, he began using, too. “I’d be living with my mom, smoking weed, drinking, skipping school. I got into alcohol and Ecstasy in a big way.” He held a variety of jobs, only with the intention of saving enough money to buy more drugs and drink. “It got to the point where I was consuming more daily and couldn’t keep a job. Not even day labour.”

About four months after his father had passed, Shawn went to Port Renfrew with his mother, sister, nephew and a best friend to scatter Daryl’s ashes. “It’s such a beautiful place. My father loved it there,” says Shawn. Once they had said their final farewells, Shawn’s mother and sister confronted him about his promise to get clean.

“It was an intervention,” says Shawn. “They had planned this.”

“I felt something kinda break inside of me,” he recalls. “They were right. I couldn’t quit on my own. I needed help.”

And so, as Shawn explains, he became willing.

“I’d been thinking about quitting a lot. I knew about Our Place because dad used to go there. At first, it was the Open Door – I was hanging out with him way back then. We even came up with a scheme to go to Miracle Valley and sober up there together.” Daryl did go to the treatment centre, run by the Salvation Army of BC, but he did not complete.

When Shawn came to Our Place intent on sobriety, things were different this time.

“I was scared. Kym, one of the Outreach workers, helped me. I told her what I wanted to do, that I wanted to go to Miracle Valley like my dad but I was going to complete the program.” Kym convinced Shawn to go into the three-day detox program at the Royal Jubilee Hospital prior to treatment to better prepare for a successful recovery. He followed her advice. “That was June 10,” he says with pride, “my clean date.”

After detox, he completed the three-month treatment program, moved to a recovery house in Sooke, joined Narcotics Anonymous and found a sponsor.  He would seek out day jobs and, if nothing was available, he’d come to Our Place. Bob Frank, Facility Manager, offered him volunteer work and, in time, paid work.

“There was lots of support there. People noticed I had changed, saying, “Hey, you’re looking good, man. Stick with it.”

Bob knew Shawn’s father and understood Shawn’s history. Repeatedly concussed from passing out on the street, getting hit by a car, his violent upbringing all contributed to a brain injury.

”Bob said, you know, you may qualify for this disability funding. He encouraged me to go to school, to get a trade. So, I made that leap and applied for college.” Yes, it was hard, he admits, but he successfully completed the Sheet Metal and Metal Fabrication certification program and now works full time for a major aircraft construction company in their sheet metal shop.

“He had the willingness to do whatever he had to do to change,” says Bob. “That saved him. We just gave him the platform to recover.”

Asked why he stood by his father in spite of the abuse, Shawn shrugs. “You only get one dad in your lifetime. And I stayed in that world because it was the world I knew, I grew up in that world. Dad would bring these men home with him, his friends from the street. That’s who I was then. But that’s not who I am today.”

There are triggers he must face which come up when he gets uncomfortable or when he is around people who are using. But Shawn has found a way to sidestep temptation.

“When I get the itch to use,” he smiles, “I just look at this tattoo on my right arm.”